We have seen so many small galleries that made us feel cozy due to their size, but Nevan Contempo is a special place consisting of two garages redesigned into the inconspicuous, but very significant art space, whose owner is Mikuláš Nevan. This gallery is well-known because of the artists like Krištof Kintera, Sándor Szasz, Tomáš Svoboda or Pavla Malinová.

Nevan Contempo is now an opportunity for Jan Brož and Richard Nikl to present their work. These young artists act on the art scene individually, but there are also some works that they have created together. They came with several artworks for the exhibition Je suis symmetry and they needed to enrich this place with the female ideas. That is why they invited Deanna Havas to help them with (literally) some ideas. 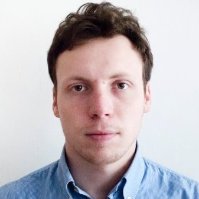 When you open the door of this gallery, the white wall resonates with the expression:

However, you can take a brochure of the exhibition and Deanna’s ideas will make you laugh, smile or at least think. She says:

“I had to turn off Drake to concentrate on Foucalt”

Then you start to compare these ‘girlish’ expressions with the omnipresent masculinity…or…at least masculinity in the first room. The biggest object in this room is a white table which is called What is Hidden Under the Table, so when you look under it, there is an engine that really works. This table does not have typical legs, but it is made of the iron construction with focus on details. What else is hidden under the table? It contains the tubes that go nowhere. This artwork makes us believe that not everything is as it seems and we should be looking for the real essences of things as well as humans. 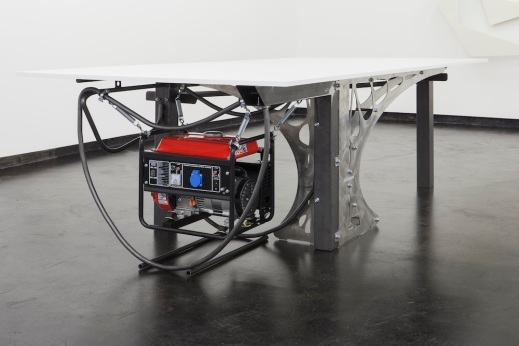 There is also another work which we can call an installation and we can find it on the wall like an object entering our space. This artwork can remind us of a white spiral that actually is not spiral at all, so we come to the iron play with the shapes. If it were positioned on the floor, I am sure that it would be a really nice, but a bit impractical chair. This installation is not ‘obtrusive’ and hence its white color harmonizes with the minimalism of What is Hidden Under the Table. 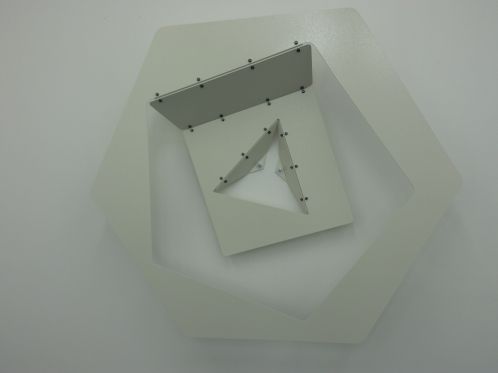 Now you are situated in the atmosphere of an imaginary angry girl, men smeared by oil, table with the innocent color and even a gas and smell of petrol. What a paradox, isn’t it? However, there is also another room. You can find there another table and another spiral of similar qualities, but the wall contains a rainbow work that brings into this gender atmosphere a presence of homosexuality. And does it even represent symmetry? Not really. And now you can be confused. 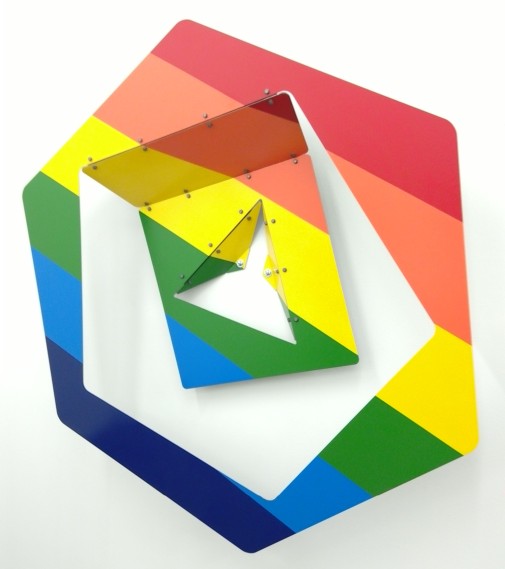 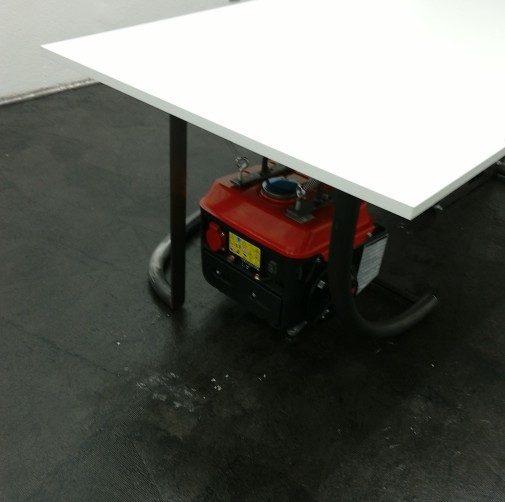 Jan Brož and Richard Nikl try to define a center of gravity between the productive individuals and tools that nowadays help us to achieve desired results of work effort across almost all disciplines. It is interesting how they used quite a big chain of topics within relatively small place and certainly small amount of works. What is more, these works seem usable and they do not compel us to perceive them just in a one way. They do not force us to have the same opinion about some problematic, but they allow us to appreciate a human effort.

Even though we cannot penetrate into the minds of the authors, we can try to find some similarities within the work of different artists. When we focus on conceptual art and minimalism, we can notice the works of Seth Siegelaub. This curator, art dealer, political researcher or collector of textiles influenced the art scene of the whole world. Siegelaub was a plumber at first and this environment can be associated with Je suis symmetry. This employment helped him to use certain materials for his sculptures and we can see that Jan Brož and Richard Nikl did something similar. We do not know how were the beginnings of Mikuláš Nevan as the owner of Nevan Contempo, but Set Siegelaub found his very first gallery boring, because when you have a gallery ‘you are trapped there.’

Siegelaub also tried to answer the questions of work and esthetics which he called ‘popular creativity.’ He found it in the history of textiles, but probably, Brož and Nikl too realized that the concept of work as well as esthetics can unite into the new art. Seth Siegelaub was not interested in the transition from handcraft to machine but in the relationship between work and esthetics – and this can be also seen in the exhibition Je suis symmetry. The textiles helped Seth to see the changes of certain systems and works associated with esthetic quality. This is the thing that we are looking for in minimalist, conceptual art. We are not satisfied with conventional opinions on aesthetics, so we constantly create something that would emphasize the subjectivity of aesthetic experience.

It is also important to say that Seth Siegelaub wanted to point out that he cared about politics and we should do as well. He said that he wanted “to bring a political consciousness to the various specialized areas in which [he worked].” It is therefore questionable if the art should be a means for expressing one’s political opinions as we could see for example in DOX’s HateFree? exhibition. It is nice when artists try to highlight the problems of our society, but we can ask if it is enough when they many times do not even know how to solve them. We also cannot be sure if Je suis symmetry has a really political context, but the hidden ideas like emancipation, materialism or rights of homosexuals can be considered as the issues that we should at least think about. And that was the purpose of Seth Siegelaub as well. He wanted to change the way people think, or rather contribute to that change.

This problematic leads us to different questions on art and one of them can be the concept of temporality. This ‘time within art’ can be related to the politics of today, interpersonal relationships as well as a society as a whole. It is evident that society is changing along with our perception of art. However, we have to ask how come something is so important for the survival of our social rules and then it just disappears. Is it our necessity to look for the most progressive aspects of our lives? Perhaps, we are not satisfied with something that is permanent – we are not able to renew certain things and we just see a better future in everything that is new. These philosophical expressions can be used when we look at art as such. It is not about the material artworks, but again, about the ideas behind them. The portrayal of historical art and its intentions are the same in today’s society, however we do not believe in historical significance, so we have to apply new criteria (not only) to the art. Nevertheless, we indirectly go back to our past, because our lives appear to be the circles from which we cannot escape.

This temporality has been very often regarded as a means to fulfill the conceptual purposes of art. Yes exactly – the art through which we have to think about thinking about thinking about thinking. But when we began to see the moment of people starting to focus more on the artists and their mental processes, than their artworks? Probably, it was here for the whole time and it just awakened the viewers’ attention when artists said: ‘This is art! even though (for the general audience) it really was not. Whether it is Marcel Duchamp‘s Fountain or Joseph Kosuth‘s One and Three Chairs, Conceptualism has influenced a wide spectrum of artists and their viewers. It is also used in the contemporary terms, but today, in almost every kind of art it is about the idea itself, if it is a conceptual installation or a realistic representation of random people. We can therefore notice this wonderful impact on art that can be regarded as a philosophical superiority of many artworks. Conceptual art also brings us the otherness and a desire not to be too serious. We can live simply but we have to be original.

And what is your life’s minimalist concept of symmetry?

Interview with Robert Horvitz: Seth Siegelaub: Contributing to change (I think we can make some trouble). For Stedelijk show catalog